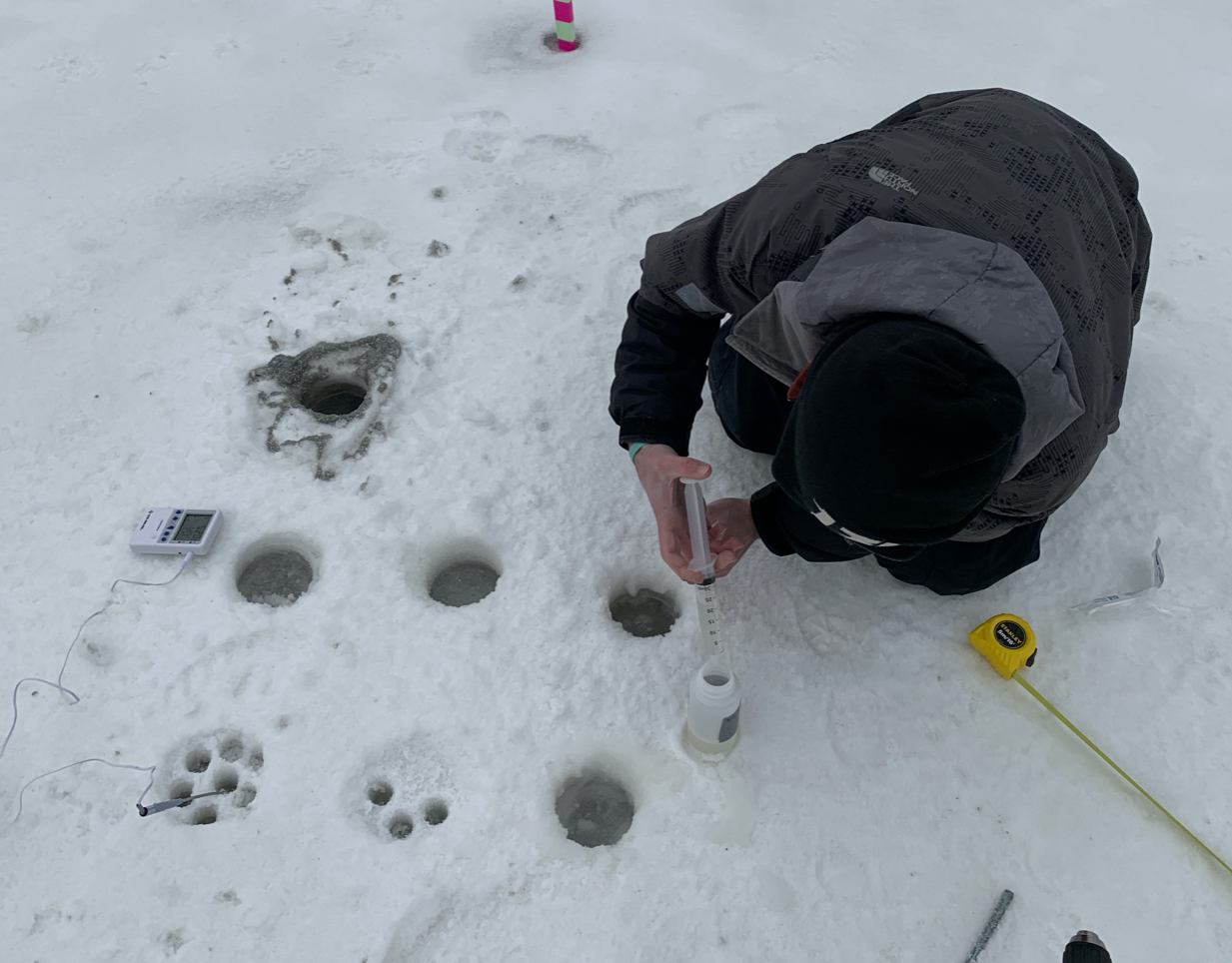 At the Basque Lakes on British Columbia’s Cariboo Plateau in Canada, Oceans Across Space and Time researchers are investigating the thermal, chemical, physical, and biological profiles of ices that form over hypersaline lakes.

The lakes have diverse brine chemistries that may mirror those of several of NASA’s high priority astrobiology targets such as Europa, Enceladus, and Mars. By working to better understand life in these unique ice-brine systems, our OAST scientists further the potential to use this knowledge in planetary environments in the future.

Involved since the inception of the Oceans Across Space and Time project, Georgia Institute of Technology graduate research student Jacob Buffo said their work on the Cariboo Plateau speaks to one of OAST’s key goals: “understanding how ocean worlds and their biospheres co-evolve to produce detectable biosignatures.” Or in other words, how oceans and their environments work together to produce scientific evidence of past or present life.

Studying how nutrients are transported to these organisms and their distribution within the ice is crucial to understanding how these creatures thrive in such a harsh place.

“This work will provide a better understanding of how chemically diverse ice-ocean/brine systems evolve, and how biology adapts to thrive in these super cold and super saline environments,” he said.

Emma Brown, an undergraduate researcher from Georgia Tech who works on the team with Buffo, said they investigate ice-ocean environments here on Earth in order to gain a better understanding of how biogeochemical processes function under different environmental stressors.

“Studying extreme environments on Earth gives valuable insight into how similar systems could potentially support life on icy ocean worlds in the solar system,” she said.

In Earth’s polar oceans, the sea ice-ocean interface provides a gradient-rich, porous material, where a diverse set of life thrives. But while sea ice provides an excellent analog for potential sodium chloride dominated systems, like Earth’s oceans, other ice-ocean worlds may have more exotic chemistry.

Above: Fluorescein stained brine channels near the ice-ocean interface of an extracted ice core – showing the connectivity and multiphase nature of the ice.

“For example, Europa may possess a magnesium sulfate dominated ocean and Mars may house hypersaline brines within its shallow subsurface. To determine how variable ocean chemistry affects the physical and chemical properties of ice, and what that means for any potential resident organisms, alternate analog environments must be found,” Buffo said.

To find such an analog, Buffo traveled to north-central British Columbia in the middle of February (winter in the northern hemisphere) with Dr. Alex Pontefract and Dr. Chris Carr, both of whom are OAST Co-Investigators from the Massachusetts Institute of Technology.

“Our target was a number of hypersaline lakes in British Columbia’s Cariboo Plateau. These lakes can have salinities as high as 30%, have diverse sodium, magnesium, sulfate, and carbonate chemistries, and freeze over in the winter,” Buffo said.

“To do this, we traveled to three different lakes to take samples of the sediments, brines, salt crusts, and ice. The emphasis of my involvement was taking ice samples from the lakes, as my work involves modeling the physical and thermochemical evolution of ice-ocean/brine interfaces,” Buffo said.

Ice samples from different depths in the ice cover were collected and temperature readings of the ice was recorded. Now, a number of different analysis are being carried out on these samples including: cell counts (to understand how much biology is trapped in the ice), ion chromatography (to determine the composition of the ice), and 16s rRNA (to determine what organism are colonizing the ice).

These hypersaline lake systems on Earth provide an analog that OAST scientists can study to better understand brine systems on Mars and ice-ocean environments on moons like Europa and Enceladus.

“Understanding where and how putative organisms may colonize environments on ice-ocean worlds is crucial for both planetary exploration and protection. Since many contemporary ocean worlds in our solar system are ice covered, including a substantial portion of Earth’s oceans throughout the year, it’s useful to investigate how organisms interact with and depend upon these icy ceilings,” Buffo said.

Above: Alex Pontefract and Hannah Dion-Kirschner (Northwestern University) extracting sediment and salt samples through a borehole at Salt Lake. The brine temperatures can be as cold as -4C.

With samples from several of these super salty lakes taken during both winter and summer, the OAST team is one step closer to predicting what we might find in the ice-ocean environments of other worlds.

“Chemical and biological analysis of ice and brine samples, along with temperature data, has been used to inform a predictive model for ice-ocean systems and their evolutions. We hope to validate our predictive model with more data, and begin to constrain the biosignature dynamics of other planetary ice-ocean environments,” Brown said.